Will Selling In A Flood Zone Be A Nightmare? 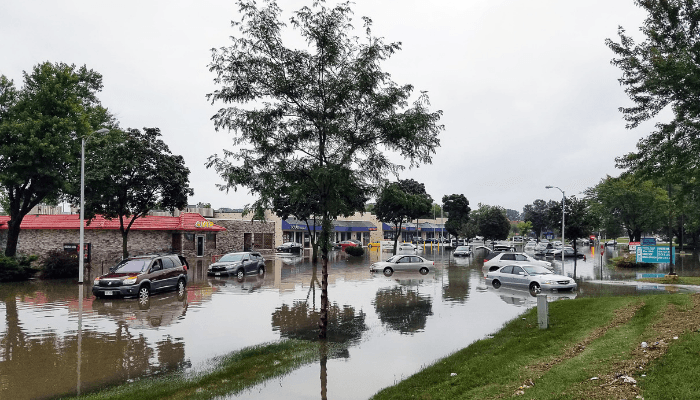 So Your House Is in a Flood Zone—Will Selling it Be a Nightmare?


How hard is it to sell a house in a flood zone? Depending on which type of flood zone you’re in, you may face some challenges ahead to attract the right buyer willing to take on the extra risk and expenses associated with your home’s location. Deep breaths, though.

Think of it like selling a house on the corner of a busy intersection or near a power line—your location in a flood zone is a hurdle, not necessarily a deal breaker from the start. People buy and sell houses with various drawbacks every day. According to FEMA, 13 million homeowners live in the high risk 100-year flood plain, which means they face a 1% chance of flooding during any given year.

Whether you bought your house when it was already in a flood zone or your house recently got classified as high-risk, find out how to navigate key steps like pricing, disclosures, and conversations about flood insurance. With the right approach you’ll put yourself in the strongest position to sell despite your location.

Know your situation: Flood zone variances and insurance basics;
As a homeowner you know the ins and outs of your property including which flood zone you’re in, but here’s a quick refresher on what that means as you go to transfer the home to someone else, according to FEMA (the Federal Emergency Management Agency).

Flood zone tiers;
You’re in a high-risk flood zone, or Special Flood Hazard Area (SFHA), if your flood zone on FEMA’s map has a code starting with A or V. (This also is referred to as the “base flood” or “100-year flood.”)
You’re at moderate flood risk (having a 0.2 percent annual chance of flooding) in Zone B or shaded Zone X.
If you live in an area of minimal flooding, you’ll fall in Zone C or unshaded Zone X.
You can look up your flood zone by address via FEMA’s Flood Map Service Center.

The National Flood Insurance Program (NFIP);
If your house is located within a high-risk flood plain, you have more on your mind than water damage whenever severe weather erupts. You’re also likely paying for flood insurance on top of your regular homeowners policy. The vast majority of Americans who have flood insurance, or about 5 million policyholders nationwide, get their policy through the publicly subsidized National Flood Insurance Program (NFIP), which FEMA oversees.

Getting a mortgage for a property located in a flood zone;
If you live in a high-risk flood zone, you have at least a 1 in 4 chance of flooding during a 30-year mortgage. Under federal law, people with homes in high-risk areas with mortgages from federally insured or regulated lenders (this includes most nationally known financial institutions) must have flood insurance. However, lenders can, at their discretion, require flood insurance for mortgages on homes located in low- to moderate risk areas as well.

But some residents in areas hit hard by flooding, such as people on Long Island who weathered 2012’s Hurricane Sandy, already have seen their annual premiums jump over the past two decades from $1,200 to $2,500, according to Newsday. Moreover, an overhaul of the program —which fully goes into effect in October 2020—could raise premiums for people living in certain flood zones.

“I have seen premiums that range anywhere from $3,000 to up to $7,000,” depending on the flood zone where your home is located, said Ariel Pena, a top real estate agent in New York City.

The NFIP bases its insurance policies on factors such as a building’s elevation, age, and amount of coverage and deductible. In general, owners of homes closer to water and homes that are more expensive to rebuild can expect higher premiums.

Get the certificate of elevation and do a little legwork;
The buyer of your home may need to present their lender and insurance agency with an elevation certificate which basically shows: if a major flood were to occur, would a house theoretically be above the height of the estimated floodwaters, or would it be at risk? Insurance agencies use this document to determine their flood insurance premiums.

One option as a seller could be to go ahead and order an elevation certificate from your local floodplain manager proactively, Pena suggests. You could shop it around to a few different insurance companies to get a few quotes for the new buyers to stay ahead of the game.

Help your new buyers foot the insurance bill;
It’s not uncommon for sellers to offer their buyers a one to two year home warranty to cover unexpected issues that may arise with the home’s main systems and components during the initial course of ownership. Similarly a seller could offer to discount the buyer’s flood insurance costs for a year as an incentive to purchase the property, either through an adjustment to the purchase price or credit at closing.

Real estate disclosures and flood zones: Always be transparent;
Real estate disclosure laws vary from state to state. Many states have their own specific form that sellers use to disclose any known issues that could impact the safety or value of their property. There’s often a place on the disclosure form to note a home’s past history of flooding or location in a flood zone.

The Illinois disclosure report, for example, lists the following disclosures related to flooding and flood zones:

I am aware of flooding or recurring leakage problems in the crawlspace or basement. (Yes/No/NA)
I am aware that the property is located in a flood plain or that I currently have flood hazard insurance on the property (Yes/No/NA)
You can talk to a top local agent about your own state’s disclosure rules, and HomeLight also has a list of all 50 states’ individual disclosure laws including their respective reports. However, the general rule is that you should never hide material facts about your house from buyers, regardless of state laws, including its flood zone status or insurance requirements.

“It’s better for everybody just to disclose,” says Pena.

Adjust your pricing based on your flood zone status
Your home’s location in a flood zone should be reflected in your pricing strategy. Generally a house outside of the floodplain that doesn’t require insurance is going to be worth more.

One study that evaluated home values in New York City after Hurricane Sandy found that low-end properties up to $284,921 decreased by 15.8% in value when newly placed in a flood zone. However, the impact was minimal for higher-end properties.

But every situation is unique, so talk to your agent about how to set an attractive list price to get buyers through the door.

Make improvements to reduce flood risk and keep premiums down;
It’s possible to lower your flood insurance premiums by making improvements to your house that mitigate its exposure to flooding. A few options may include:

Install flood vents in the crawl space;
Sitting water can damage your foundation, which may lead to costly repairs. Vents in the crawl space can allow water to flow freely in and out of the enclosure, reducing the risk of structural issues in the event of flooding. The government has a few specific regulations on flood vent install—for example, you’ll need to make sure the vents are below flood level and that the enclosure has at least two openings.

Relocate utilities;
Consider relocating utilities such as a heat pump to an attic or an elevated platform, which may save you and your future buyers from an additional flood insurance surcharge.

Elevate the home;
This might not be an option where you live, but if you elevate the first floor of your house even one foot above the base flood elevation, you could see about a 30% reduction in annual flood insurance premiums, according to FEMA. Costs for this type of project start around $10,000 though, so it’d only make sense in severe situations.

Ask about the Community Rating System;
Communities enrolled in this system, which encourages community-wide efforts to reduce flooding, may be eligible for a discount on flood insurance. So, rally your neighbors to help reduce your area’s flood risk.

If your home has never flooded before, be sure to mention that;
Homeowners are legally entitled to a free report from the Comprehensive Loss Underwriting Exchange (generated by the consumer-reporting agency LexisNexis) showing their past seven years of insurance claims history. You can request a copy either online or by calling (866) 312-8076.

If you’ve had flood insurance but haven’t had to tap into it, this can help put buyers at ease. “It’s something that, when a buyer is hesitant, could be brought up,” Pena said.

Examine other ways to reduce your flood risk
If you have historical property or you’re unable to elevate your property, FEMA provides several

detailed guides on flood protection strategies, including the Homeowner’s Guide to Retrofitting and Reducing Flood Risk to Residential Buildings That Cannot Be Elevated, such as townhomes, row-houses, brownstones, and mid-rise multi-family buildings.

Selling your home in a flood zone: You’ve got options;
If your house is in a flood zone, prospective buyers already may be aware of this possibility as they shop for homes in your area. Some will be more willing to shoulder the cost than others.

However, your situation calls for some special expertise, so partner up with a real estate agent who knows the ins and outs of flood zones and flood insurance and can talk to you intelligently about your options. Agents with this type of experience will also help you promote other benefits and features of your home and neighborhood to counter its drawbacks. At the end of the day, your home is a lot more than its flood zone designation.